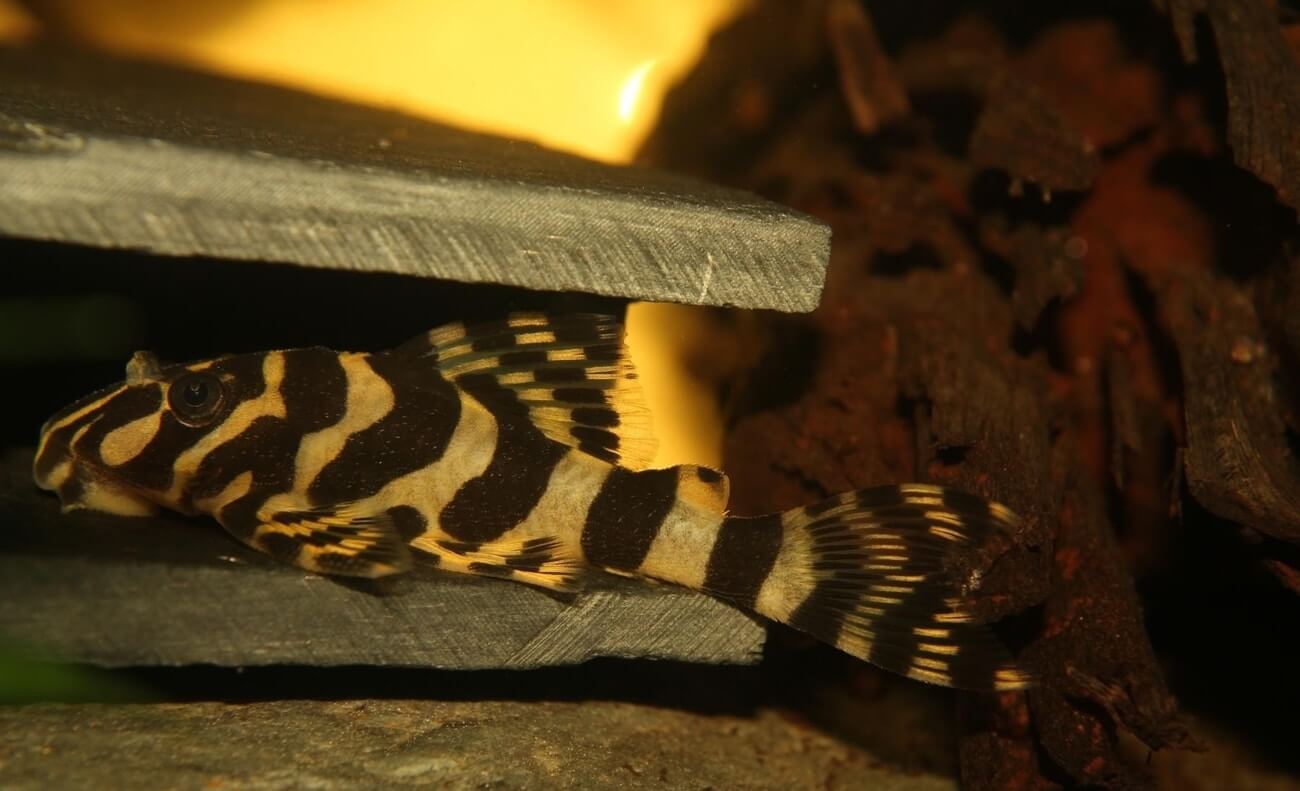 The Leopard Frog Pleco (L134) is one of our all-time favorite freshwater fish. But they don’t get the attention they deserve!

This is why we find ourselves recommending them to aquarists all the time! But if you want this species to thrive, there are some very specific conditions you’ll need to provide.

This guide on Leopard Frog Pleco care will cover everything you need to know if you want to own this species in your freshwater tank.

Leopard Frog Plecos (scientific name: Peckoltia compta) are a freshwater species that go by a few additional names. Sometimes you’ll see them referred to as the L134 or Imperial Tiger Pleco (that last one can make things a bit confusing at times).

This fish is found in South America (primarily Brazil) and the largest collection of them swim in the Rio Jamaxim and Rio Tapajós tributaries. They’re quite adaptive and can thrive in waters with currents that range from slow to fast. You can usually find them on rocks using their suckermouth to look for food.

Many of the Leopard Frog Plecos that are found in the aquarium trade are wild-caught. Because of this, they can be tricky to find at your local fish store (and the price can be a little higher too).

Author Note: One of the main draws of this species is the size. The L134 is not nearly as large as many other types of plecos, which makes them a great choice for aquarists who don’t have room in their home for a large tank.

The appearance of the Leopard Frog Pleco is absolutely stunning. While they definitely still have the classic “pleco” look, this species has a unique flair that we love.

First, let’s start with the colors.

This fish has a yellow and black stripe pattern that covers its entire body. The stripes on the face and fins point straight back while the stripes on the body run more vertically (getting wider toward the back).

Sometimes the yellow is rather vibrant, and other times it’s a bit more faded. This just depends on the specimen. However, the yellow ones can be quite colorful fish!

In terms of the rest of their body, the Imperial Tiger Pleco looks fits the pleco mold. Their body is thickest at the head and gets significantly thinner behind their dorsal fin.

All of their fins are large and fan back quite a bit. You’ll usually see them all splayed out when this fish is resting on rocks, driftwood, or the substrate (which they do often). The very edges of their fins get semi-translucent which gives them a neat look.

The typical lifespan of a Leopard Frog Pleco is around 8-10 years. This is a relatively long chunk of time especially for a fish on the smaller side.

Of course, this lifespan assumes good care. If you don’t keep these fish in optimal conditions their life expectancy will suffer.

Author Note: There have been reports of the L134 exceeding the 10-year mark, but that’s quite uncommon.

The average Leopard Frog Pleco size is between 3.5 and 4.3 inches in length. This makes them one of the smaller plecos in the aquarium scene (along with the Bristlenose).

This size is also a big plus for aquarists who want a pleco, but don’t have space in their home for a large tank. Many other plecos get quite large which means the minimum tank size ends up being pretty big.

Leopard Frog Pleco care is not very challenging. These fish can be successfully kept by aquarists with very little experience.

This species is hardy, peaceful, and generally low-maintenance. As long as you do a good job of keeping their water conditions consistent you shouldn’t have any problems with them!

With that being said, it’s still important to do your research and know what they require. Hardy fish can still suffer in a suboptimal habitat.

Below are the fundamental care elements to be aware of:

The minimum recommended tank size for Leopard Frog Plecos is 30 gallons. This is manageable for most aquarists and is made possible by the smaller size of this fish.

Author Note: However, it’s always recommended to go with a slightly larger tank if you can. This will allow you to set up a more natural environment and significantly improve the quality of life of your fish.

When it comes to Leopard Frog Pleco care, water parameters are a bit interesting. When you take a glance at the numbers there really isn’t anything to worry about.

However, the trick is keeping them stable.

Consistency is key when it comes to this species. While they’re known to be quite hardy and adaptable to a wide range of environments, they can suffer in water conditions that fluctuate.

So even though it’s crucial to meet the conditions below, that’s just half the battle. Most of your focus should be spent ensuring that the water parameters in your tank are stable.

In order to maintain consistency in your aquarium, we recommend purchasing a high-quality and reliable water test kit. This will allow you to accurately monitor the condition of your tank and stop any parameter shifts before they become a problem.

Setting up the habitat of a Leopard Frog Pleco tank is pretty straightforward. These fish aren’t too picky as long as you provide the essentials to make it feel like home.

You can be a little bit flexible when it comes to the substrate. Both sand or gravel will be fine since they will spend most of their time camped out on other objects near the bottom of the aquarium.

And speaking of those objects, that’s where rocks and driftwood come into play.

These are definitely the most important items to include since they’re found all over the Leopard Frog Pleco’s natural habitat. These fish will use them to hide, feed, and relax on throughout the day.

Try to construct some natural caves for them using these materials too. This will give them somewhere to hide if they want to feel safe and secure.

Author Note: Aim for reasonably-sized rocks and driftwood in relation to the size of these fish. Your tank size will impact how big everything can get of course, so take that into account as well.

Feel free to experiment when it comes to plants as well. The Leopard Frog Plecostomus is a very plant-friendly species that won’t destroy or uproot anything. You can even try some floating aquarium plants as well if your tank is large enough!

The L134 pleco is very hardy and resistant to disease, but that doesn’t mean it’s invincible. Like any freshwater fish, this species can definitely still get sick (especially when kept in suboptimal conditions).

Ich is one of the most common illnesses that can affect your Leopard Frog Pleco. Also called white spot disease, this parasitic disease can quickly take hold of your fish and negatively impact its health.

Fin rot and dropsy are two more culprits you’ll want to keep an eye out for. Both can progress quickly which means it’s important for you to act fast if you see early signs.

In general, the best way to keep this species healthy is to prevent diseases from happening in the first place. Stay on top of the water quality, feed them healthy foods, and don’t introduce anything into the tank that hasn’t been vetted first.

Prevention is always easier than treatment!

There are a number of foods you can feed Leopard Frog plecos, which makes this one of the easiest parts of their care!

These fish are omnivores and should be given a diet that consists of both plant and protein-rich foods. Some kind of sinking pellets or wafers are a good starting point, and you can add in some bloodworms, brine shrimp, and tubifex as well.

To mix things up, feed them some vegetables as well. Here are some good options:

Author Note: Contrary to popular belief, these fish are actually not one of the best algae-eaters out there. They might nibble on it from time to time, but it’s not something they pursue aggressively.

Leopard Frog Plecos have a fantastic temperament for fishkeeping. This species is peaceful, calm, and won’t start trouble with other fish in the tank.

The only situation where you might see these fish getting a little feisty is when you have multiple males and not enough space. Males can get a little territorial at times (which isn’t unusual for fish). However, if you provide them with enough room this will rarely happen.

In terms of their general behavior, there’s a lot to like as well! Unlike plenty of other bottom-feeder fish, Leopard Frog Plecos are actually fairly outgoing!

Sure, they’ll spend a lot of time hiding out. But they won’t hesitate to emerge and go exploring from time to time as well. This makes them a great choice for aquarists who enjoy spectating the behavior of their fish.

Author Note: These fish are nocturnal by nature. However, this cycle can shift a bit once they get used to their aquarium.

There are plenty of compatible tank mates you can consider if you own an L135 pleco. These fish are very peaceful and will usually ignore other species that are in the tank.

As long as you don’t keep them with anything extremely large or aggressive, your Leopard Frog Pleco should be just fine!

Below are some of the common tank mate options for you to consider, but feel free to experiment as long as you find non-aggressive fish that have similar water requirements.

Author Note: They can also be kept with larger shrimp like the Bamboo or Amano. Smaller shrimp might get eaten though!

Breeding Leopard Frog Plecos is something that’s definitely possible in captivity. However, it can be a little bit trickier than breeding other species of freshwater fish.

If you want a realistic shot at breeding this species it’s important to provide them with caves and hiding places. These fish use these places to breed and will not initiate the process otherwise.

We highly recommend lowering the water temperature a little bit in order to trigger breeding as well. Some breeders have found it helpful to add a little bit of water to the tank as well through water changes.

Once the female has tucker her eggs away in the cave, the male will guard and tend to them. It should take no more than a week for the eggs to hatch, and you’ll see the little babies swimming around freely after a few days!

Make sure to feed them brine shrimp at this age in order to help them grow.

Leopard Frog Plecos are a great freshwater fish that we recommend to aquarists of all experience levels. It doesn’t matter if you’re just getting started or simply want a species that’s low-maintenance, the L134 is a great choice!

Out of all the commonly-kept plecos, this might be our favorite in terms of color and raw beauty. They stand out in pretty much any tank.

If you have any questions that weren’t answered by this care guide we’re more than happy to help. Simply reach out to us on Facebook or through our website and we’ll get back to you as soon as we can!

Read More
There are many different types of aquarium catfish out there. In fact, they’re one of the most popular…
CCare Guides

Read More
Clown Loaches are one of the most popular freshwater fish in the aquarium scene. They’re found in tanks…