10 Popular Types Of Rasboras You Need To See

As you probably know, there are many different rasbora types you can choose from when picking a species for your aquarium.

And there’s a lot to like about all of your options.

Rasboras tend to be peaceful, easy to care for, and quite pretty. These small fish are a pleasure to keep and we frequently recommend them to aquarists of all experience levels.

But with so many types of rasboras out there, picking your favorites can be a challenge.

So we decided to put together this list to help you with that process. It makes it easy to compare each species and quickly decide which ones are right for you!

Also known as the Celestial Pearl Danio, the Galaxy Rasboras truly lives up to its name. The base color of the fish is a deep blue, which mimics the night sky.

Breaking up that blue are several pearl-colored spots. They shimmer in the light, giving that cosmic look the fish is known for. The fins take on a bright red color for some unique contrast. The red is accompanied by some black stripes.

In the wild, Galaxy Rasboras live in warm, shallow ponds. They do best in aquariums with natural decor and water conditions similar to what they’d experience in the wild. That means temperatures between 72 and 79 degrees and relatively neutral pH levels.

These fish spend most of their time at the bottom of the water column. To ensure that they have access to food, provide some sinking pellets. Make sure that they’re small! Galaxy Rasboras have tiny mouths that can make eating large snacks difficult.

The Chili Rasboras is a beautiful schooling fish that can add some great color to your aquarium. Best kept in groups, these tiny fish rely on social behaviors to stay healthy and safe. Even still, they can sometimes come off as timid before they get comfortable with the environment.

Once they finally come out of hiding, you can enjoy their beautiful coloration! The body of the fish is covered in shades of pink and red. Two lateral stripes of bright red and dark black run the length of the body.

They create a nice accent that pops. You might also see some spots of red on their translucent fins and some shades of black on the dorsal fin.

Chili Rasboras can be a bit finicky about water conditions. They come from natural blackwater ponds that are low in minerals. To keep this type of rasbora healthy, you must condition your water and get rid of any unnecessary chemicals.

Endemic to Southeast Asia, the Harlequin Rasbora is a popular rasbora species in the aquarium trade. With their head-turning appearance, it’s not hard to see why.

They have a diamond-shaped body with a dramatic taper to the tail. Most of the body is covered in a pinkish-orange hue. But, there’s a large wedge-shaped black patch to add some visual contrast.

The black patch starts at the dorsal fin and tapers down to the tail, following their natural shape. This black spot stands out against the light-colored body, creating an interesting look as the fish swims around our aquarium!

Harlequin Rasboras are peaceful and easy to take care of. They’re non-aggressive and will spend most of their time swimming with fish of the same species. To see the best results, a group of eight to ten fish is recommended

Without that social group, these fish can easily become stressed and diseased.

Clown Rasboras are another peaceful fish that can do well in a community setting. However, choosing appropriate tank mates can be tough due to the fish’s unique needs.

This type of rasbora comes from blackwater streams associated with forest peat swamps. These waters are very murky and stained with tannins. Decaying plant matter changes the water chemistry, creating an environment that not every fish will tolerate.

Clown Rasboras prefer acidic water as low as 4.0 on the pH scale! They also like dimly-lit habitats filled with driftwood, decaying leaves, and floating plants.

These fish take on a pinkish-orange color. They also have random black spots on the body. These spots vary in size, shape, and position. So, each fish you have will look unique!

That’s a good thing because these fish like to be in larger groups. Like the Harlequin Rasbora, they prefer groups of eight to ten.

If you’re looking for an active fish that can keep you entertained, the Scissortail Rasbora may be for you. These fish are strong swimmers. They prefer a lot of open space so that they can dart from one end of the tank to the other!

Scissortail Rasboras aren’t too picky when it comes to decor. You can do a standard natural setup with live plants and driftwood. Or, you can get creative with plastic accessories. They don’t mind either way!

Just make sure that you’re leaving plenty of swimming space so that the fish can stay active.

Scissortail Rasboras are named after the deep fork in their tail. The fish’s body is thin and streamlined. It’s covered in shimmering silver. However, the tail has a stripe of black and white on each fork, giving the fish some cool detail.

Naturally found in several countries throughout Southeast Asia, the Blackline Rasbora is very hardy. It often inhabits polluted waters. Though, it much prefers slow-moving ponds and canals.

The fish’s hardiness translates well to aquarium living. They aren’t affected too much by fluctuations in water changes. As long as you stay within accepted ranged, the Blackline Rasbora shouldn’t have any issues.

The fish prefers warmer temperatures between 72 and 79 degrees. Soft water and a neutral pH balance are essential, too.

The Blackline Rasbora takes its name from one of its most defining features. The body is predominantly gray and transparent. However, a thin stripe of black runs laterally from the gill plate to the tail.

The black stripe is accompanied by a stripe of yellow directly on top of it. On the base of the tail, you’ll find a splash of red as well.

With the Dwarf Rasbora, you can have a large school of fish in a moderately sized tank. Also known as Pygmy Rasboras, these fish prefer to be in groups of at least half a dozen. But, they do best when you have 20 or more!

In those large groups, these fish will swim together and create a lot of movement in your tank. Thanks to its unique appearance, the display will be stunning!

The fish take on a ruby red color. Dark spots of black throughout the body add some unique contrast. The same goes for the splashes of orange surrounding the dots!

The Dwarf Rasbora requires optimal water conditions to reach its full potential. It needs clean water filled with plants. For the best results, you can mimic the acidity and tannin infusion of their natural habitat.

They do quite well with pH levels as low as 4.0. These fish can also thrive in temperatures between 68 and 82 degrees.

Peaceful and community-oriented, the Lambchop Rasbora is a quirky little fish with a lot of personality. They do best in groups of at least six. With a larger group, the fish will spend more time playing and less time hiding.

The interesting name of this fish was inspired by the distinct mark on its body. Stretching from the dorsal fin to the base of the caudal fin, this mark is similar to the wedge-shaped patch on the Harlequin Rasbora. But, the mark on this fish resembles the shape of a lambchop!

It adds some eye-catching contrast to the fish’s body, which is pretty plain. They’re covered in bright red or orange. You might see some yellow thrown in, too.

Lambchop Rasboras are easy-going. They’re not fussy about food and adapt well to most conditions. As long as your aquarium is well-decorated and well-maintained, the fish can thrive.

Here is another type of rasbora species that likes to live in acidic environments. In the wild, these fish come from blackwater streams connected to peat swamps. They can live in environments with a pH level as low as 3.0!

That said, they don’t need that acidity to survive. They can adapt to virtually any environment, making them a great choice for community tanks.

One interesting thing about the Brilliant Rasbora is its dietary preferences. In their natural habitat, they’re considered micro predators. They snack on insects, larvae, and crustaceans.

In captivity, they will accept dry foods. But, it shouldn’t be the only thing they eat. Provide plenty of live or frozen foods that are rich in protein. This will keep them healthy while also bringing out some of their colors.

Most of the body is covered in shiny silver. It has a nice iridescent quality that shimmers in the light, which is why they have their name. Running from the tip of the snout down to the base of the tail is a black stripe.

With its striking coloration, the Pheonix Rasbora is a highly sought-after species among aquarists. From a distance, the fish displays a ruby red color. Upon closer inspection, you can start to see a lot of beautiful details.

Spots of black are surrounded by hints of orange, yellow, and red. These colors can be seen on the fins as well. The various colors combine to create a fiery look that, which is why they’re named after the mythical phoenix.

Don’t worry, these fish are not as fierce as or aggressive as the phoenix! They’re very relaxed and get along well with other peaceful fish of its size. They do particularly well with other small Rasboras and some Tetra species.

Like most Rasboras, Phoenix Rasboras should be kept in a large group. They need social interaction to feel safe in their surroundings. When grouped up, the fish will often swim together as they explore the tank.

Do You Have A Favorite?

Now that you’ve looked at each of the popular types of rasboras, it’s time for you to pick your favorites. Everyone has their preferences, and the look of a certain species might catch your eye more than others.

This is all part of the fun when it comes to fishkeeping! The joy of seeing a fish you enjoy swimming around in your home never gets old.

If you can’t decide between a few there’s always the option of keeping them together in a larger tank. Many rasbora species can get along with each other (double-check this before you buy of course), so it might be worth considering a community tank instead!

We know that there are a few uncommon rasbora types that we didn’t include on this list. If you find one you like and want some info, we’re more than happy to help. Just send us an email!

Read More
There are many different types of aquarium catfish out there. In fact, they’re one of the most popular…
RResources 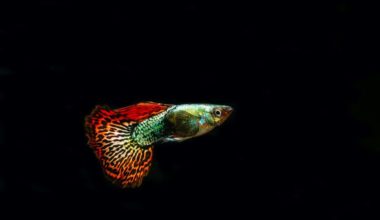