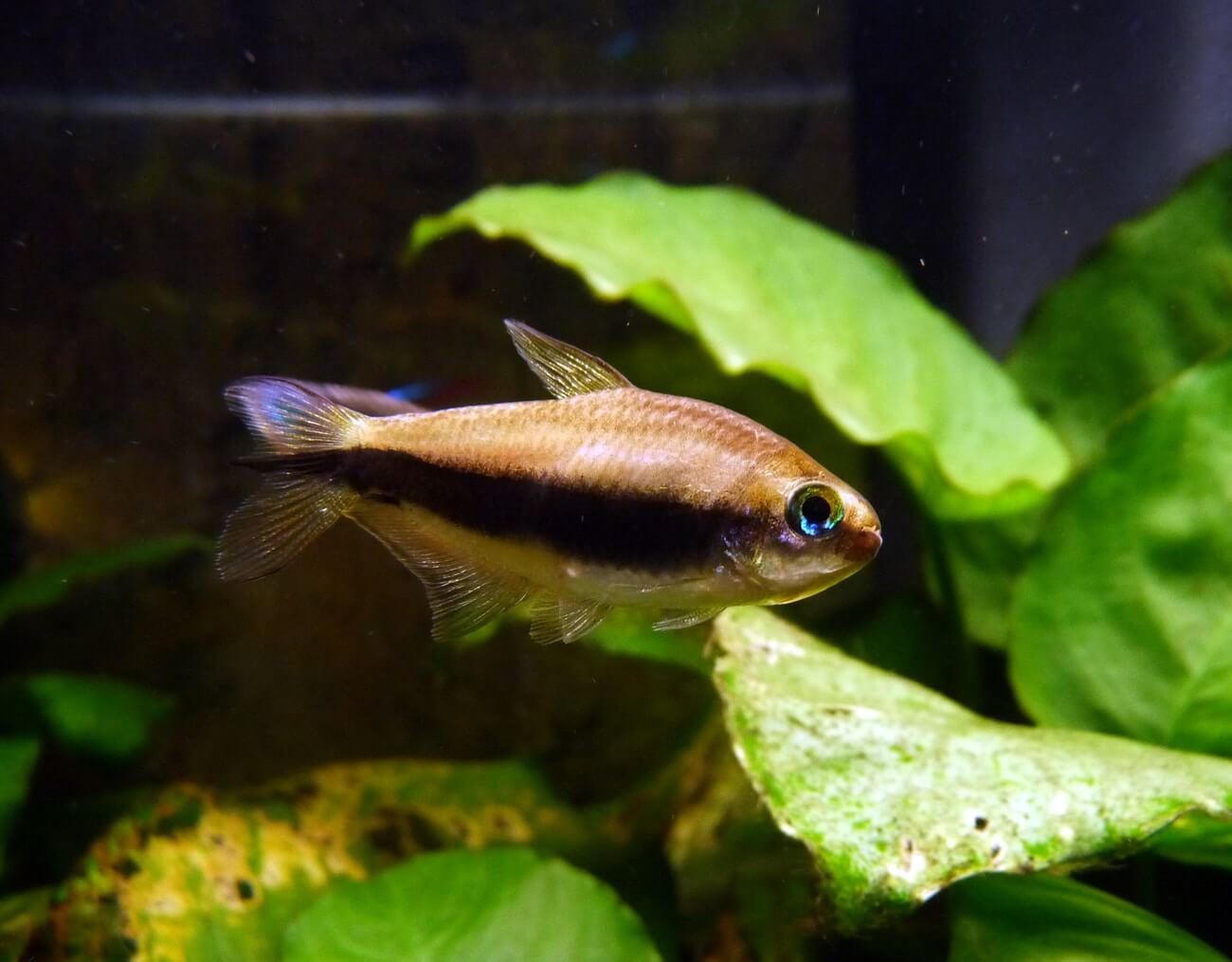 The Emperor Tetra is an underrated freshwater fish that we’ve been a fan of for years. While they’re not as popular as some of the other tetras out there, we think they deserve more attention.

These fish have an understated beauty that really shines when you see them in person. Not only that, but they’re also extremely easy to care for!

This guide will teach you the basics of Emperor Tetra care and give you plenty of extra information you should know if you’re thinking about becoming an owner. By the time you’re done reading it, you’ll be ready to buy some for yourself!

In the wild, Emperor Tetras can be found throughout Colombia. They are most commonly found in the Atrato and San Juan river basins.

First introduced to the aquarium trade in 1960, Emperor Tetras have become a staple in the community. These fish are bred in large numbers throughout the world and are easily obtainable at many pet stores.

While they’re not the most eye-catching species in the Tetra family, Emperor Tetras have a unique look that definitely stands out in the right environment.

The average adult Emperor Tetra size is only around two inches in length, making this a rather small freshwater species.

Some owners have reported lengths closer to three inches, but that’s typically only possible when kept in very large tanks (and even then it’s not a guarantee). Most will stay on the smaller size in a captive tank regardless.

Author Note: Thanks to their small size, Emperor Tetras are typically kept in groups. While not true shoaling or schooling fish, these Tetras have been known to swim in unison when kept in large numbers.

The average lifespan of an Emperor Tetra is approximately six years with the proper care.

Like any other fish species, the lifespan of an Emperor Tetra is directly affected by the level of care they receive. Fish kept in substandard water conditions are very prone to stress and disease, so it’s important to pay attention to their needs and provide the best care possible.

It’s also smart to buy your fish from a reputable seller as well. This will decrease the chance of you buying a fish that has underlying health issues or genetic conditions.

Emperor Tetras are beautiful fish with several defining characteristics. The shape of the fish is long and slender. The primary color is bluish-gray.

However, the scales of this species have a unique iridescent quality. Purple undertones create a beautiful sheen. The purple hues are much more apparent in low-light conditions.

Accompanying that base color is a prominent black stripe. It runs from the mouth all the way to the tip of the tail! If you look closely, you might also see a tiny shimmering blue line directly on top of the black stripe with some fish.

Emperor Tetras are very sexually dimorphic, making it a breeze to distinguish between males and females. Males tend to be slightly longer and take on a more pointed shape. Meanwhile, the females have a plumper body.

That’s not all. Males and females also have different colored eyes! Females typically have metallic green eyes while males have metallic blue eyes.

Finally, there’s the tail. Males have a prominent ray in the center of the tail fin. At first, it appears to be an extension of that black body stripe. However, it extends past the center point, resulting in a signature trident shape.

Emperor Tetra care is very simple, which is one of the main reasons why they’re so popular with aquarists.

This means they’re not only beautiful, but very low-maintenance. These fish are hardy and generally undemanding when it comes to food.

Emperor Tetras are tropical species that thrive in typical freshwater conditions. However, that doesn’t mean that you should take their care lightly! Here are some established care guidelines that you should follow to keep your fish healthy.

Ultimately, the best aquarium size for your fish will depend on several factors. As we mentioned earlier, Emperor Tetras are perfect for larger community tanks.

Because of this, you’ll need to take the entire community size into account when choosing an aquarium.

If you’re keeping a single-species tank, a small group will do just fine in a small 10-gallon tank. 20 gallons is even better if you want to keep a large group.

Author Note: These fish do need plenty of room to swim, so it’s important not to overcrowd a smaller tank.

For community tanks with other species, a minimum aquarium volume of 30 gallons is recommended.

The best way to keep Emperor Tetras healthy is to replicate water conditions in the wild. Luckily, that’s pretty easy to do in most homes!

In the wild, these fish live in slow-moving streams. The water is warm and moderately hard.

While Emperor Tetras can adapt to a wide range of conditions, it’s best to keep things as stable as possible. These fish can react negatively to extreme water changes.

That makes it crucial to perform regular water changes and equip the tank with a powerful filtration system that can keep ammonia levels low.

If you were to take a trip to South America and take a look at the Emperor Tetra’s natural habitat, you would notice that the waters are dark and filled with vegetation.

Because of those environmental characteristics, these fish prefer subdued lighting with plenty of places to hide.

Start with a dark-colored substrate on the bottom of the tank. You can use gravel. However, dark-colored sand is closer to what’s found in natural riverbeds.

Incorporate live plants throughout the tank. These plants will serve as hiding spots, places of exploration, and shelter from the light. You can add floating plants with tons of leaves. Java fern and Water Sprite are good options.

Position the plants all around the tank. But, make sure there’s still ample room to swim around without the fish getting entangled in leaves.

On top of the substrate, you can also implement decorations. You can use items like driftwood, rocks, and even plastic tank ornaments.

Author Note: For tank equipment, you’ll need a low-powered light and a suitable filter. A reliable hang-on-back filtration system should do just fine.

However, you need to make sure that the filter’s water outlet isn’t creating too much flow. Position plants or decorations to decrease water disturbance if necessary.

There are no known diseases that affect the Emperor Tetra species as a whole. However, they can still experience a range of common freshwater fish diseases. Some of the most common are Ich, gill flukes, and various infections.

Ich is a parasitic disease that manifests itself through white spots throughout the body. It’s highly contagious and can quickly spread in the closed ecosystem. Luckily, it’s easy to treat with copper-based medicines.

Gill flukes are another parasite that can affect Emperor Tetras. This one latches onto the gills. It causes noticeable infection and has the potential to be fatal if not addressed quickly.

Finally, there are bacterial and fungal infections. These ailments can result in unwanted growth on the body or visible rashes.

The good news is that all of these diseases are preventable. In most cases, health issues are directly caused by poor living conditions and stress. As long as you maintain your tank, you should not encounter too many issues.

Emperor Tetras are very easy to please when it comes to food. They will readily accept commercial fish flakes or pellets.

These fish are omnivores. In the wild, they typically feed on worms, larvae, and tiny crustaceans. You can provide the occasional high-protein snack alongside dry food.

Peaceful by nature, Emperor Tetras get along with most non-aggressive fish.

They will usually stay towards the middle and top of the water column. However, they may venture to the bottom from time to time.

Acts of aggression don’t occur often with this species, but when they do it usually happens with males. Males tend to fight for dominance in smaller tanks.

Usually, this fighting doesn’t result in major bodily harm, but it’s still important to keep an eye on the fish and remove separate any aggressors.

Emperor Tetras do best in groups of five or six fish. Due to the aforementioned aggression between males, it’s smart to only keep a single male in the group. This prevents any fighting and keeps the community peaceful.

If you don’t want to keep a large group, these fish also do well in a simple bonded pair.

As for other fish species to consider as tank mates, you have a lot of choices. For the most part, any similarly-sized peaceful fish will do just fine.

Ideally, you’ll want to stick with tank mates that come from South America and have similar habitat preferences. It’s also important to avoid larger fish that could mistake the Emperor Tetra as food.

Here are some tank mates worth considering:

Breeding often occurs without any intervention if the fish are kept in an optimal environment. However, you can trigger the process as well.

To do so, you’ll need to create a separate breeding tank.

The tank should have higher temperatures of around 80 to 82 degrees Fahrenheit. The water should be on the softer side and have a pH balance of around 7.0. Use a filter equipped with sponges to prevent harm to the baby fish.

Introduce many plants into the breeding tank. They will play an important role in keeping the eggs protected. Emperor Tetras are known to eat eggs, so the plants will keep them hidden. If you don’t want to use plants, you can utilize a breeding mop instead.

About a week before you want to start breeding, separate your bonded pair. Feed the fish with live food and keep an eye on the female. She should start to plump up with eggs. When this happens, move the pair into the breeding tank.

Breeding should occur within a day. The female will lay between 50 and 100 eggs over several hours. Once she’s done, remove the pair from the breeding tank.

Eggs will hatch in about two or three days. For the first week or so, the baby fish will survive off the egg sack. Once they become free swimming, you can provide infusoria as food. About a week later, they’ll be ready for powered fish fry food or baby brine shrimp.

As you can see, these freshwater fish are a great fit for pretty much anyone interested in setting up a home aquarium. The combination of their beauty and low-maintenance nature makes them the perfect pet!

If you have any other questions about Emperor Tetra care, we’re more than happy to help you out. Just get in touch with us through social media (or our website) and we’ll get back to you as soon as we can.

Read More
There are many different types of aquarium catfish out there. In fact, they’re one of the most popular…
CCare Guides

Read More
Clown Loaches are one of the most popular freshwater fish in the aquarium scene. They’re found in tanks…