Columbian Shark Care: Everything You Need To Know

The Columbian Shark is a very interesting fish that many aquarists don’t know about. And the ones that do, tend to have inaccurate information.

In fact, we consider this species to be one of the most underrated aquatic pets out there!

To explain why, we decided to put together this handy guide. It will teach you the basics of Columbian Shark care and showcase what makes this fish so special.

Despite their name and appearance, Columbian Sharks (scientific name: Ariopsis seemanni) are not a type of shark at all!

This species actually belongs to the catfish family. However, their appearance and swimming pattern closely resembles that of a shark, leading to their unique moniker.

Columbian Sharks have a wide distribution. They can be found as far south as Guatemala and as far north as the Gulf of California. The fish reside in rivers and tributaries that empty in the Pacific Ocean, resulting in some unique care requirements.

This is a relatively popular species in the fish-keeping trade. They are often sold as juveniles in pet stores across the world. However, Columbian Sharks are fast growers and require plenty of room to truly thrive.

The typical lifespan of a Columbian Shark in captivity is usually 10 to 15 years. While it’s rare in a controlled environment, they can actually live a bit longer. These fish reportedly have a much longer lifespan in the wild.

Columbian Sharks are heavily affected by their environment and quality of care. While these fish have a lengthy lifespan, nothing is guaranteed.

This species has some unique needs, and failing to meet those needs could shorten the lifespan of the fish significantly.

Once you get a bit closer, signature catfish characteristics become more apparent. For example, these fish have undersling mouths, which is one of the more recognizable catfish traits. Surroundings the mouth, Columbian Sharks also have several pairs of barbels.

The predominant color of these fish is silver-gray. Juveniles tend to be more vibrant in terms of coloration. While adults lose some of that vibrancy, they’re still eye-catching nonetheless.

Like we mentioned earlier, the dorsal fin is tall and triangular. While the dorsal fin looks innocent due to its transparent nature, it can be dangerous.

Columbian Sharks have a pointed dorsal spine that’s connected to a venom-producing gland.

The spine is fully capable of stinging owners, so exercise caution when cleaning out the tank. The sting is comparable to a bee sting, and it can result in some painful swelling!

The average size of a full-grown Columbian Shark is around 10 to 14 inches in length.

However, they can get much bigger than that. In larger tanks with the right conditions, Columbian Sharks have been known to reach lengths of 20 inches!

Columbian Sharks care is interesting in the fact that it evolves as they age. Because they’re sold so often in pet stores, many assume that they are easy to care for.

In reality, they can become more demanding as they get older.

There’s a lot of misinformation floating around (see what we did there?) about these fish. Oftentimes, this leads to stunted growth or premature death.

If you want your Columbian shark to reach its full potential, follow the recommended care guidelines below.

Let’s start with tank size. Due to their massive potential size, having a large tank is a must with Columbian Sharks.

At the very least, you’ll need a tank that can hold roughly 75 gallons. That’s enough for a single Columbian Shark.

If you plan on keeping a small group, you’ll need a 100-gallon tank at least.

Author Note: Aim for the largest tank that you can reasonably get. These fish are strong swimmers. They need a lot of room to explore, stay healthy, and thrive.

Here is where things get difficult for the Columbian Shark. Despite being advertised as true freshwater fish, this species actually prefers some salinity.

You see, Columbian Sharks move through various water conditions over the course of their life.

As juveniles, they reside in purely freshwater rivers. However, they move closer to the coast when they become adults (where the waters are brackish).

When fully grown, they can even spend time in pure marine conditions if needed! Dedicated owners will need to make those changes in their tank as the fish gets older.

Generally, it’s recommended that you provide brackish waters for the Columbian Shark. They do best in hard waters with lower salinity. Here are some water parameters to follow.

Because of their unique water requirements, you should be performing consistent water tests throughout the week. This will allow you to have up to date information about the status of your tank and the fish living inside.

What To Include In Their Tank

Getting your tank set up for Columbian Sharks isn’t too difficult. Because these fish are strong swimmers, it’s best to keep the environment relatively barren in terms of decorations.

Utilize sand as your substrate. If you have younger fish, you can incorporate some modest decorations to give them some places to hide. Pieces of driftwood or mangrove roots work well.

You can incorporate some plants here and there. They need to be plants that can survive in brackish conditions. Anubias, Java fern, and Sago Pondweed should do fine. Keep the plants sparse and focus on creating open space for the fish.

Author Note: Strong filtration is essential. Thanks to their large size, these fish can quickly sour the quality of the water. Invest in a powerful filter than can effectively cycle the volume regularly. We recommend the Fluval FX4.

Another important thing to consider is water flow. Columbian Sharks live in fast-moving rivers. Thus, they prefer considerable flow. Use the outlets of your filter as well as pumps to create good oxygenation and ample flow.

Overall, Columbian Sharks are quite hardy. They can handle fluctuations in water conditions without any major issues.

But, that doesn’t mean that they’re not immune to all the standard tropical fish ailments.

These fish can suffer from Ich, skin flukes, bacterial infections, fungal infections, gill fluke disease, and more. Fortunately, most of these problems are easily avoidable if you maintain water conditions.

Many inexperienced owners encounter problems with their Columbian Sharks due to a lack of salt. Without that subtle salinity, these fish can become stressed and disease-ridden. Make sure to monitor conditions regularly to avoid this.

One important note about Columbian Sharks: they don’t have scales. As a result, you cannot treat diseases with traditional copper-based medications. You’ll have to use temperature-based remedies or medications with Malachite or formalin.

Columbian Sharks aren’t particularly picky when it comes to diet. They’re omnivores in the wild and feed on things like crustacean and shrimp.

In captivity, you can provide them with a wide range of foods. They’ll readily accept flakes or sinking pellets.

Columbian Sharks should be fed twice a day. Feed them only enough food that they can eat in about five minutes to avoid the possibility of overeating.

Columbian Sharks are mostly peaceful. They spend their days occupying the lower and middle parts of the aquarium.

Author Note: However, they may venture up to the surface if they are kept in a single-species tank and feel comfortable enough to explore.

Like other catfish, Columbian Sharks are big scavengers. You can find them searching for food at all hours!

The only time you might encounter aggression issues is when these fish are kept with smaller species. Columbian Sharks do have a high prey drive.

This means they’ll often mistake smaller fish as food. Even if they shared the tank with a smaller species as juveniles, those smaller fish will eventually become food.

Interestingly enough, Columbian Sharks make good community fish. The only caveat is finding similar-sized fish that have the same needs.

The best tank mates are going to be other Columbian Sharks. These fish are not territorial at all. In fact, they are actually considered to be schooling fish in the wild!

A group of at least three fish is recommended. A small group helps the Columbian Sharks feel more confident in their surroundings.

Other than fish of the same species, you can group Columbian Sharks with other non-aggressive brackish fish as well. Here are some good tank mates to consider:

It’s important to keep a close eye on any tank mates you try for the first couple of weeks. Any serious signs of aggression will require you to separate the fish.

Breeding Columbian Sharks is very difficult to do in captivity. Few see success because of the unique spawning process (adults breed in the open ocean).

After the female lays the eggs, the male will fertilize them. He’ll then carry them in his mouth until they hatch. He continues to hold onto the baby fish fry until he can swim upstream and deposit the fry into a freshwater environment.

Recreating those sudden changes in the environment are nearly impossible in captivity.

Instead of giving general guidelines on how to try it (like other sites), we encourage you to avoid this until there’s a proven track record of these fish being bred in captivity. The breeding process wears on your fish over time, even if it’s unsuccessful.

We hope you now have a better understanding of Columbian Shark care, and what makes this species so interesting.

With such a unique look and the interesting conditions they live in, there are very few fish like them!

If you’ve owned these fish in the past (or have some currently) and are interested in including some of your stories or pictures let us know! 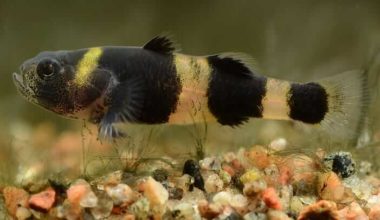 Read More
The bumblebee goby is hands-down one of our favorite fish. These interesting and adorable little critters steal the…
CCare Guides 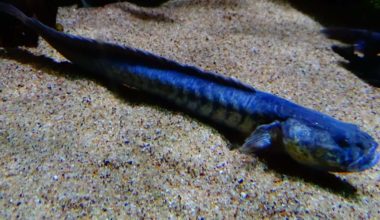 Read More
The Dragon Goby is a special fish that brings a very different kind of feel to your aquarium.…