Vampire Shrimp are an overlooked freshwater species that can add a lot of value to your tank. Their unique look, peaceful temperament, and filter-feeding nature make them one of our favorite little critters to own!

But their lack of popularity means that many people don’t know how to care for them. These shrimp have a few distinct requirements that differ from other species.

This guide will make everything clear by going over all the essentials of Vampire Shrimp care. By the time you’re done reading it, you’ll be ready to go!

Despite their somewhat menacing name, these shrimp are actually quite peaceful. They spend most of their time in hiding, only to come out during the twilight and nighttime hours.

These shrimp are naturally found in Western African and South America. They usually inhabit freshwater coastal areas. You can find them hiding out between mangrove roots and other dense vegetation.

In captivity, Vampire Shrimp require much of the same living conditions. Naturally shy and reclusive, these shrimp aren’t ones that will keep you entertained. But if you do manage to spot them out in the open, they will put on a unique display you won’t soon forget!

In good conditions, the average Vampire Shrimp lifespan is about five years. This makes them one of the longer-lived shrimp species.

Author Note: They’re said to live between eight and ten years in the wild, but captive shrimp have an average lifespan that’s a bit shorter.

That said, they can only reach their full potential in a well-maintained environment. Like any other shrimp species, their environment directly impacts their overall health. In unstable water conditions, they can experience potentially life-threatening health issues.

The typical Vampire Shrimp size is around five to six inches in length. This is a lot larger than many other types of freshwater shrimp.

Not only are they longer, but they’re also a lot bulkier. Most specimens are sporting a heavy-duty shell that offers some great protection. It really stands out when you first see them!

Thanks to their larger size, it’s easy to appreciate the beauty of the Vampire Shrimp. Take a close look at the invert’s body and you’re going to notice several distinct features. The most notable is its fans.

This species is a fan-feeder. They capture food with expansive hair-like fans on their arms. You can observe them lifting the fans up to capture organic matter in the water for consumption.

As mentioned earlier, the shell is very thick and bulky. The overall shape and build of the shell closely resemble that of a crawfish instead of a traditional thin-bodied shrimp.

On their legs, you’ll notice bumpy points. These points cover the sides of the legs. On the bottom of the legs, they have a single larger point. This unique physical characteristic is said to help shrimp hold onto rocks or plants for stability in heavy currents.

In terms of color, there’s a lot of variety with the Vampire Shrimp! Most shrimp are going to have a light bluish-gray hue. However, this color can shift to darker shades of blue, full-on white, reddish-brown, or pink!

Their colors can change multiple times throughout the shrimp’s life. However, their color is largely dependent on their age and environment. Those kept in darker environments tend to have a more intense color.

Author Note: When young, it’s nearly impossible to differentiate between male and female Vampire Shrimp. But once they reach about three inches in length, those differences become more apparent.

Generally, males are bigger than females and have a thicker first pair of legs. Meanwhile, females have larger abdominal plates.

Proper Vampire Shrimp care is all about providing a well-maintained environment that meets their needs.

They’re a bit more demanding than your average freshwater critter. However, their care requirements are pretty easy to get the hang of once you have some practice.

Below are some important care guidelines to keep your Vampire Shrimp in good shape.

The ideal Vampire Shrimp tank size should be at least 20 gallons. While some aquarists have had success keeping them in a smaller tank (15 gallons is often mentioned), we believe the larger aquarium will make a big difference in the long run.

These shrimp rely on microorganisms, plant detritus, and other organic items in the water to eat. Larger tanks are more conducive to that type of thing. Filters in small tanks are very efficient, leaving the environment too clean for the shrimp.

A 20-gallon tank or larger also provides plenty of bottom space for the shrimp to roam around. You can easily create multiple hiding spots for the shrimp while keeping the rest of the aquarium open for other forms of life.

Vampire Shrimp aren’t too fussy when it comes to water conditions. They can tolerate a wide range of parameters without experiencing any issues.

The main thing you need to concern yourself with is ammonia and nitrate levels. Like other shrimp species, Vampires are highly sensitive to the effects of biological waste. You must fully cycle the tank before adding your shrimp and equip the aquarium with a powerful filtration system to keep ammonia levels undetectable.

Regular water changes are a must. It’s also important to test parameters regularly to ensure that the underwater habitat is right for your shrimp. Here are some water parameters to follow.

Creating a safe and comfortable environment is important for the Vampire Shrimp. These invertebrates do best in natural-looking habitats filled with dense vegetation.

Start by creating a layer of sand substrate on the bottom of the tank. Sand is soft and suitable for digging. Even fine gravel could injure the shrimp’s delicate feeder fans, so it’s best to avoid it.

Next, add plenty of rocks and driftwood. Create small pockets and crevices for the shrimp to occupy.

Author Note: They will spend most of their time during the day hiding in these areas, so give them plenty of options.

At this point, you can add plants to the tank. Utilize live plants instead of plastic ones. Live plants naturally shed organic matter into the water, which is the perfect source of food for the Vampire Shrimp. There are no must-have species.

Mix up several plant species to get the look you’re after. Add some taller stem plants in the back, fine-leafed plants in the foreground, and some moss for ground cover. Get creative and turn the tank into a plant oasis!

For equipment, the most important thing to remember is the need to create a strong current. You can get a high-powered filtration system to keep the water moving. Alternatively, submersible pumps work well, too.

Aim the pump to the side to circulate the water. Don’t overdo it. You’ll need to find the right balance to create a subtle current in the tank. Don’t make the current so powerful that it makes life difficult for the shrimp of fish!

Vampire Shrimp can experience a handful of health problems, with bacterial and fungal infections being the most common.

Once bacteria and fungal spores get into the closed environment of your tank, they can wreak havoc on your shrimp’s health. Infections can attack dead tissue before spreading to other parts of the body.

Parasitic infections are possible as well. The most common parasite is Vorticella, which usually comes into a tank through plants and rocks. When your shrimp ingests the plant matter, they’re unknowingly eating the parasite, too.

Vampire Shrimp can experience disease at any time. However, they’re most vulnerable when molting. The shrimp will shed their old shells every couple of months. After molting, their new shell is thin and soft, which puts them at risk for infection.

Most shrimp will hide for a few days after molting to stay away from potential danger.

The good news is that most fungal, bacterial, and parasitic diseases are treatable.

Avoid using copper-based medicines, as they can be fatal to the shrimp. Instead, opt for invertebrate-safe medications. Simply quarantine the sick shrimp and follow the directions on the package.

Your Vampire Shrimp are going to get most of their nutrients from feeding on their own, which is a concept that is unfamiliar to a lot of newer aquarists.

These shrimp will usually start feeding once the sun starts to set. They will make their way to a part of the tank that’s receiving the current.

Once there, they’ll extend their fans and catch food. It sometimes looks like the shrimp are waving! Vampire shrimp will eat everything from plant detritus, tiny microorganisms, food leftovers, various types of aquarium algae, and anything else they can get ahold of!

With that being said, you can provide some supplemental feeding as well.

Author Note: There’s a technique you’ll need to know if you want to feed them properly. Sprinkle a few pinches of the food upstream. The current will carry the food to the shrimp where they can catch it!

Vampire Shrimp are naturally docile and shy. They get along well with other shrimp species and can even live with others of the same species.

That said, most prefer to be alone. These invertebrates aren’t known to show any signs of aggression, but they don’t like to be bothered too much.

In fact, these shrimp can experience severe stress in the presence of highly active tank mates (more on that in the section below).

Throughout most of the day, Vampire Shrimp are difficult to find. They spend their days hiding under rocks or within plants. When the sun goes down, they become more active.

They’ll walk the bottom of the tank to search for food. Periodically, you’ll see them raise their fins to collect food particles. This can happen anywhere in the tank. But, most shrimp will find a permanent feeding spot that they go to.

If you have multiple Vampire Shrimp in the tank, they may even share the spot! Other filter shrimp are the only creatures that Vampire Shrimp like to be social with.

If you want to make your Vampire Shrimp part of a larger community, you have several options. This species does very well with other shrimp. Despite being larger than popular dwarf shrimp, they aren’t aggressive and won’t bully others.

Their large size also opens up several possibilities for fish tank mates. They can live with smaller peaceful fish because they are too big to become targets.

Here’s a small selection of suitable tank mates for the Vampire Shrimp:

Breeding Vampire Shrimp in captivity is possible, but it’s not very practical. It’s a very difficult process that’s usually not worth the trouble.

Most of the Vampire Shrimp sold in stores are wild-caught, as large-scale breeding methods are too difficult even for established facilities.

When Vampire Shrimp breed, the young go through several larval stages. Their eggs hatch in saltwater environments before moving back to freshwater. This environmental switch is nearly impossible to replicate in captivity without multiple tanks and a careful hand.

It is possible, but the process is far too involved for most. We recommend avoiding any attempts and letting these critters live in peace instead.

Vampire Shrimp are fantastic little creatures that really add a lot to your tank. Their unique appearance and gentle temperament make them a no-brainer for an aquarist looking for something a bit different!

We hope you enjoyed this guide and feel prepared to care for them as a result. If there’s anything you think we missed, reach out and let us know. 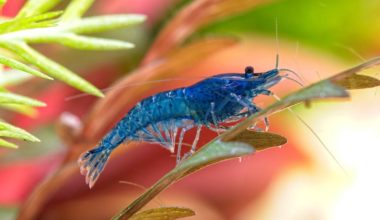 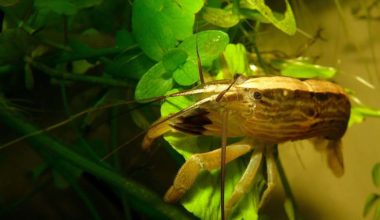