How Often You Should Feed Goldfish (Simple Rules)

Knowing how often you should feed a goldfish is very important if you want to provide them with good care. Feeding them too much or too little food (or at the wrong times) can lead to a number of problems you don’t want to deal with.

But this is an area where new owners make mistakes all the time.

They think about the tank, water conditions, and the general diet for their new pets. But they don’t know how many times they should feed them!

Fortunately, this guide will help you understand everything you need to know about how often you should feed your goldfish. You’ll learn the right schedule to follow, and why it matters.

What Do They Eat?

Before we get into the importance of feeding your goldfish the appropriate number of times per day, we need to do a quick overview of their proper diet.

This is because many owners think they know what to feed their goldfish, but really have no clue. If you’re not giving them the right food then it doesn’t really matter how often you feed them (because they’re going to have health problems regardless).

Fortunately, the ideal diet for most types of goldfish is quite easy to manage.

Your best bet is to feed them goldfish-specific flakes as the staple of their diet. This will cover a lot of their baseline nutritional requirements and serve as a foundation for their overall health.

Here’s the brand we recommend if you want to give it a shot: 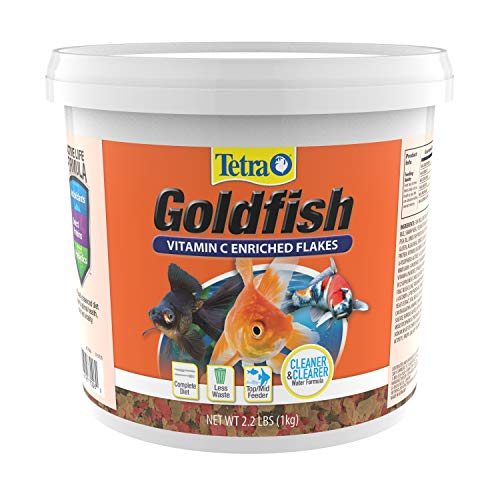 In addition to this, you can include some other foods like daphnia, brine shrimp, and various veggies. These should be fed to them a few times per week at most.

Author Note: In the wild, you’ll see goldfish eating a mixture of plants and animals. These fish aren’t picky and will take whatever they can get. This is why it’s important to provide them with a bit of variety in captivity.

How Often Should You Feed Your Goldfish?

The general rule to follow is that you should feed your goldfish 2 or 3 times per day. This is a simplified average that will work fine in most situations.

You should try to keep the feeding times consistent each day as well. This will help your goldfish develop a regular pattern and aid their digestive cycle.

Feeding them at random times throughout the day will increase the chance of them getting sick or not getting a consistent amount of food.

But even though the guidelines above make things easy, you shouldn’t be afraid to vary your plan a bit when needed. This is something that comes with experience.

For example, you might find that your goldfish doesn’t eat as much as it gets older. In this situation, it might be smart for you to try decreasing the number of times you feed them each day from three down to two (always measure the amount of food you’re giving them to be sure you’re not reducing their intake too drastically).

We always advocate owners to stick to care guidelines when they’re beginners but exercise common sense as they become more experienced.

How Much Do You Feed Them Each Time?

Now that you know how often you should feed your goldfish, it’s time to discuss quantity. Getting this right is one of the most important elements of proper care.

Let’s say you’re giving your goldfish a substantial amount of food each time you feed them. In this situation feeding them twice per day might be alright, but three times per day could be excessive!

A better alternative would be to break up the amount of food you’re normally giving them over two meals into three. This is easier on digestion and will also provide your goldfish with a bit more enrichment over time (fish love feeding time).

To find out the right amount to feed them, stick with the two-minute rule. This simply means you should avoid giving your goldfish more food than they can eat in two minutes.

Author Note: This rule works especially well for flake food since your goldfish will be able to locate and eat it quickly.

If you’re giving them pellets instead, you might have to extend this window of time a bit. It usually takes goldfish a bit longer to find the pellets before they begin eating (especially the ones that sink).

Is There An Ideal Time To Feed Them?

When planning how many times you should feed a goldfish, it’s common to wonder if there are specific times of the day that work better than others.

Fortunately, this isn’t something you need to worry about.

As long as you’re feeding them 2-3 times during the day on a consistent basis they will be just fine. While some other species clearly do better with specific windows of time, goldfish are rather low-maintenance in this regard.

Again, the most important thing you can do is make sure you’re sticking to a consistent feeding schedule. This will make a big difference in their lifespan and overall long-term health.

That means if you feed them at 8:30 before you go to work and again when you get back at 5, stick to it! If your schedule changes and you’re considering shifting the feeding times it’s best to transition them slowly over the course of a few days if possible.

Things To Watch Out For

Even though coming up with an effective feeding strategy is rather straightforward, there are some things you should watch out for. The three items below can impact how often you should feed your goldfish, so they’re important to understand.

Overfeeding is a common mistake that many new goldfish owners make. Unlike other pets, it can be a bit more challenging to monitor how much your goldfish ends up actually eating.

Since you’re dropping food into the water (rather than placing it in a bowl), it’s just not reasonable to expect them to eat every ounce you feed them.

When you combine this with an inaccurate food monitoring strategy (not following the two-minute rule), there are two common problems that can arise.

The first has to do with their direct health.

When you give a goldfish too much food they will get begin to get fat (no surprise there). This will begin to inhibit their core body functions and negatively impact their overall health. It makes proper digestion much harder and increases the chance of them getting a fatty liver.

It can also make them more prone to various illnesses. The chance of fin rot and dropsy skyrocket if you’re feeding your goldfish too often.

The second way overfeeding can cause issues is with the quality of the water.

When you give your goldfish too much food, some of it will stay uneaten and float to the bottom of the aquarium. While you can never get your goldfish to eat 100% of the food you give them, overfeeding increases the amount of leftover food quite drastically.

Here’s why that’s a problem:

Over time, the food that’s sitting in the tank will start to break down. This process will increase the amount of ammonia, nitrites, and nitrates in the tank. When these levels spike and aren’t controlled, the water becomes a very dangerous place for your goldfish.

A Lack Of Appetite

Learning how often to feed goldfish usually involves you figuring out the right amount of food to provide and assumes that your goldfish actually wants to eat.

But what if they don’t?

When your goldfish loses its appetite it usually means that something is wrong. And as the owner, it’s your job to figure out what that is!

One of the obvious causes is some form of disease or illness. Just like any other animal, feeling under the weather can lead to your goldfish not wanting to consume as much food as usual.

Author Note: There are a number of ways to determine if this is the case, but we always recommend starting with a water test. That can highlight any high-level issues with the water that need to be addressed before you start considering other possibilities.

There’s also the possibility that you’ve been overfeeding them. This could either cause your goldfish to not want more food (because they’re not hungry) or develop problems with their digestive system. Revisit the two-minute rule to make sure you’re not feeding them too often.

The last common possibility is simply that they don’t like the food you’re giving them! This is obviously unlikely if you’ve been feeding your goldfish the same food for years, but it’s a possibility if you’ve recently switched to a new food.

In this case, it’s important to give them a chance to adjust before abandoning the food you’re trying. Sometimes goldfish just need a chance to get used to the new food!

The behavior of the fish in your tank can sabotage how often you’re feeding your goldfish. While it would be nice to keep a community tank without having to worry about food dominance, it’s something that can stop your goldfish from getting the food they need.

Simply put, food dominance refers to bigger, stronger, or faster fish hogging all the food and preventing other fish from eating. Many times this isn’t malicious, it’s just a natural survival instinct.

Depending on the other fish you keep with your goldfish, there’s a chance that food dominance can get in the way. This can happen when keeping goldfish with an entirely different species, or in a goldfish-only aquarium.

Keep an eye on this when feeding them to get an idea if food dominance is occurring in the tank. You might need to spread the food out or try different types in order to ensure that everyone is getting enough to eat.

In certain situations, you might need to separate fish in order to allow all your goldfish to get enough to eat. This is more effective than increasing how often you feed them (which can lead to overfeeding).

Learning how often to feed goldfish is not rocket science. In fact, a lot of the main principles are downright easy!

But within that, there’s a level of situational decision-making that you’ll need to develop over time. There are a variety of circumstances that might change your strategy.

Having a strong understanding of them will help you provide better care and keep your goldfish on a consistent and healthy feeding schedule.

As always, if you’re having trouble it’s never a bad thing to call your vet for additional feedback. They can help you figure out how to navigate any feeding problems you have and get you back on track!

If you have any questions for us you can always send over a message as well. We do our best to be active on social media and regularly check our inbox.

Read More
A cloudy fish tank is something that no aquarist wants to see. Not only is it unsightly, it…