Freshwater Pom Pom crabs are a cute and unique species that many aquarists forget about. These active little critters are a blast to own, and can provide a number of benefits to the overall health of your tank.

But there’s still a lot of mystery around their care requirements. The practice of keeping these crabs in aquariums is still young, so there’s a lot we don’t know.

That means it’s extremely important to get familiar with what the aquarium community knows so far if you want them to thrive. To make things easy for you, we collected all the information on freshwater Pom Pom crab care and put it in this guide!

Not to be confused with their marine counterpart, this freshwater-dwelling crustacean isn’t as widespread as other species. As a result, aquarists are still learning quite a bit about these curious creatures.

In the wild, the distribution of the Pom Pom crab is quite vast. They inhabit freshwater springs and narrow streams throughout Africa, Asia, and Australia. The crustacean is most prevalent in countries like New Calcedonia, Madagascar, and Taiwan.

Peaceful yet outgoing, the Pom Pom crab makes an excellent addition to freshwater aquariums big and small. It’s fully aquatic too, so creating a suitable captive environment is a breeze.

Unfortunately, caring for these crabs is a short-lived endeavor. Pom Pom crabs only have an average lifespan of about one year.

Because their life expectancy is so short, top-notch care is a must if you want to keep them around as long as possible. Improper living conditions could expose the crab to disease and a myriad of health issues.

Author Note: At this point, it’s not known whether or not they live longer in the wild or in captivity. This is rather unusual but is simply due to how little we know about this species!

The Pom Pom crab is appropriately named for the tufts of hair growing out of the arms. The hairs grow from the claw joint, making it look like they are holding cheerleading pom poms!

In males, the bristles are quite lengthy and dense. For females, they are barely noticeable.

Beyond their signature pom poms, these crabs have some unique physical characteristics. The shell of the crab is quite broad for its size. Not only that, but the legs are long and slender.

In terms of coloration, most specimens take on a pale yellow or brown color. You might see speckles of darker brown here and there as well.

Telling the difference between males and females is pretty simple.

Called the apron, this plate differs in size and shape between the sexes. Males have a thin and narrow apron while females have a wide and curved apron.

The average size of a freshwater Pom Pom crab is between 0.6 and 1 inch in width. If they have particularly good genetics they can exceed the one inch mark (some have even reached 1.75 inches).

Author Note: Because this species is so small, it can be hard to get an idea of what to expect. For experienced crab owners, their size is comparable to that of the Thai Micro crab.

The freshwater Pom Pom crab is still relatively new to the aquarium hobby. Unlike other crab species out there, you’re not going to find a ton of concrete information about the needs of these crabs.

But that doesn’t mean it’s not doable!

Dedicated owners are doing a lot to learn more about these mysterious crabs and uncover the core requirements they need to thrive. Thanks to their hard work, we do have some care guidelines that you can follow.

Let’s start with tank size. You can keep a small colony of Pom Pom crabs in a tank size of five gallons at minimum.

But for the sake of comfort and well-being, we recommend using a 10-gallon aquarium instead. With a 10-gallon tank, you can keep a larger colony while giving these active crabs more room to roam.

This is one of the great benefits of owning a Pom Pom crab. They don’t need an expansive tank to thrive! If you happen to have an old nano tank sitting around, it will typically be more than enough.

The freshwater species spends most of its life in clean freshwater streams near the coast. They can enter brackish environments, but this is usually only for breeding purposes.

The preferred water conditions for this crab are still up for debate. Luckily, this crustacean is hardy and adapts well to a wide range of conditions.

To keep your crab happy and healthy, stick to these water parameters.

Author Note: Spend a few bucks and invest in a reliable testing kit to monitor these parameters. While the ranges are generous, it’s important to keep things as stable as possible if you want to maximize their lifespan.

Unlike other crab species, Pom Poms are very active and prefer to have well-decorated tanks with a lot to do!

For your substrate, use fine sand. These critters are burrowers and will often push the sand around with their claws.

You can then add natural decor items like rocks and driftwood. The crabs like to burrow underneath decorations to create a cozy resting spot.

Next, add plenty of plants to the tank.

These crabs do not purposely eat or destroy live plants, but they can accidentally ruin shallow root systems while digging. This means you should stick to floating plants or those with more robust root systems to avoid issues.

Finally, make sure that you have a tight cover on the aquarium! Pom Pom crabs are avid climbers and can easily climb up filtration systems and escape the habitat. Pop on a secure lid to keep these little escape artists contained.

Not much is known about diseases that affect Pom Pom crabs. But as a whole, they’re thought to be fairly resistant to illness.

We do know that they can suffer from common issues like shell disease, which is characterized by black lesions on the carapace. Fungal issues and parasitic infestations are common as well.

In most cases, avoiding diseases is all about maintaining good water conditions. Perform frequent water changes and monitor parameters closely. When temperature or pH levels fall out of the accepted range, the crabs can experience serious stress or disease.

Because all specimens in the trade are wild-caught you do have to be careful about bringing disease into your tank. It’s important to quarantine new crabs before adding them to an established aquarium.

Pom Pom crabs are skilled scavengers. They’re also opportunistic omnivores that will eat anything they can get ahold of.

It’s a popular misconception that these crabs are filter feeders. While they certainly catch food in their hairs every once in a while, they don’t stand still enough to truly filter feed.

Instead, this crab will scour the tank to feed on microorganisms, various types of algae, and plant detritus.

They willingly eat dry commercial foods, too. You can keep them healthy on a regular diet of dried flakes or pellets. Occasional protein-rich snacks like baby brine shrimp and bloodworms are fine as well.

If the crabs share the tank with other fish, you’ll also find them feeding on leftover foods in the tank.

Pom Pom crabs are a species that never gets boring! While other small freshwater crabs are shy and spend most of their time in hiding, Pom Poms are the complete opposite.

They’re very active and will regularly run around the bottom of the tank in search of food. You can observe them digging, climbing, and eating.

The crabs don’t pay any attention to other fish in the tank, either. As a result, they’re one of the more peaceful freshwater crab species available.

You might see some occasional fighting with other crabs (these quarrels are usually over food). Luckily, these fights don’t amount to anything and are rarely serious.

The only exception to their active behavior is molting. As with any other invertebrate, Pom Pom crabs are vulnerable once they shed their old shells. To avoid injury and stay safe, most Pom Pom crabs will burrow in the sand to molt in peace.

One great thing about Pom Pom crabs is their laissez-faire attitude about others in the tank. They could care less about what tank mates are doing!

As long as their tank mates don’t interfere with their lifestyle, you will hardly see any interaction or acknowledgement.

Pom Pom crabs do well with most peaceful freshwater fish, crabs, snails (ideally moderately-sized ones), and shrimp. They do well with Cherry shrimp, Amano shrimp, and Bamboo shrimp.

If you want to keep them with fish, stick with peaceful species that stick to the upper parts of the water column. Smaller fish are always best, as they will likely avoid eating or messing with your Pom Pom crabs.

Author Note: The only time you might experience problems is if you keep more vulnerable creatures in the tank. Remember, Pom Poms are opportunistic eaters.

They can mistake tiny slow-moving creatures for food. So, you should avoid very small snails and shrimp. Even fish fry can become food.

Currently, there are no methods of breeding the freshwater Pom Pom crab in captivity. The reason for this comes down to the nature of their breeding process in the wild.

Many believe that this species moves to brackish waters to reproduce. The babies go through different larval stages before reaching maturity and moving to freshwater rivers. From there they develop in deeper brackish environments, which are impossible to replicate in captivity.

To put it simply, attempting to breed Pom Pom crabs isn’t worth the effort and resources it requires.

Freshwater Pom Pom crab care can seem a little intimidating at first. There’s a lot of information we don’t know yet, and it seems like progress is slow.

But we’re doing a pretty good job so far.

The conditions and recommendations we’ve included in this guide have been working well for owners over the last few years. As we uncover more subtleties about what conditions these critters need, we’ll make sure to update this guide! 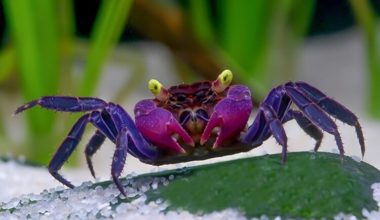 Read More
Vampire Crabs are one of the most stunning creatures you can keep in captivity. Their unique colors are…
CCare Guides 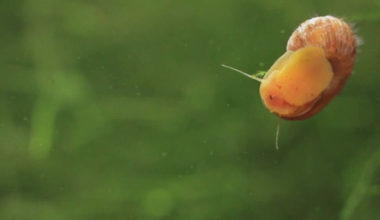 Read More
The Ramshorn Snail is a critter we really enjoy. They’re super easy to care for and quite fun…