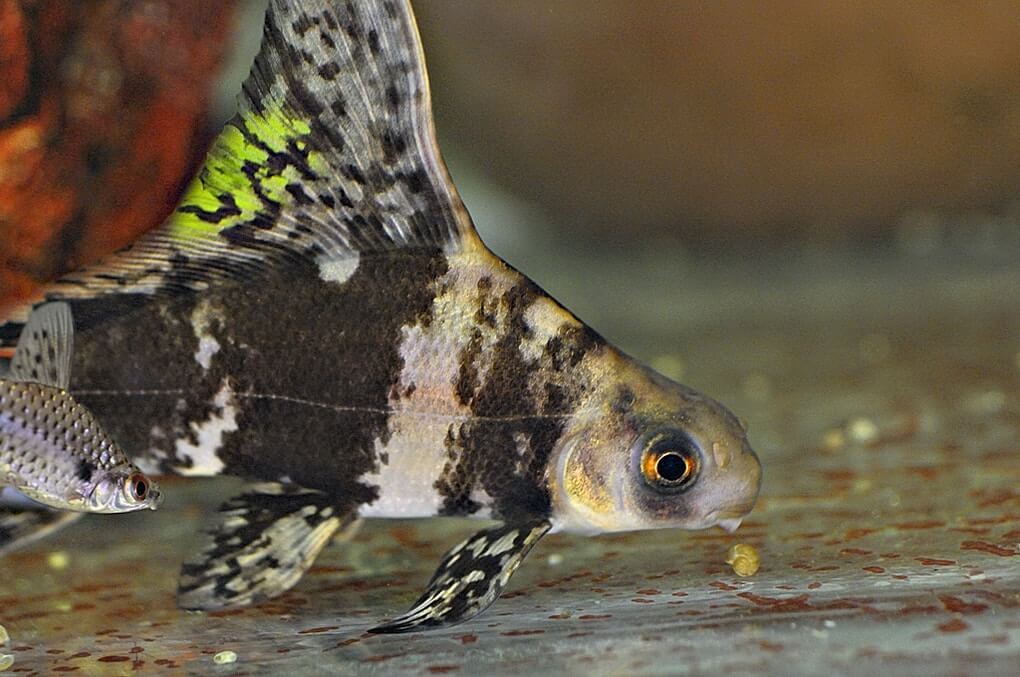 But they really should!

While these fish are not a practical option for many people (this guide will explain why), there’s a lot you can learn from these creatures. Besides, who doesn’t like learning about other species of fish?

This guide will go into everything you need to know about the Chinese High Fin Banded Shark, and how to care for them.

They go by many names. You might see them marketed as a Topsail Sucker, Chinese Sailfin Sucker, and more.

Whatever you call them, these “sharks” are not actually sharks at all! They belong to a unique class of fish that takes on a strikingly similar look to the vicious sea creature.

Author Note: This is actually true for many of the other common freshwater aquarium sharks as well.

Endemic to the Yangtze River basin in China, these fish play an important role in the local ecosystem. They actually serve as an important source of food for people in the area too. Pair that with their popularity in the fish-keeping trade and these fish are considered to be endangered in the wild.

Luckily, there are some conservation efforts in place to restore wild populations. In the fish trade, these fish are readily available for enthusiastic aquarists ready for a challenge!

The typical lifespan of Chinese High Fin Banded Sharks is between 10 and 15 years. With that being said, they can live for even longer in the right conditions.

In the wild, this species has been known to live up to 25 years! Captive specimens can reach that age as well if they are kept in large environments and receive pristine care (although it is uncommon).

These fish rely on top-notch care to reach their full potential. If you don’t cover their basic needs, your Chinese High Fin Banded Shark can experience disease and early death.

One of the most interesting aspects of the Chinese High Fin Banded Shark is its dramatic change in appearance! Many fish keepers who are familiar with this species like to call them the “reverse ugly duckling.”

If you’re lucky enough to care for one, it’s not hard to see why.

As juveniles, these fish are stunning. When you find them in pet stores, they’re usually only a few inches in length and have a striking striped pattern.

Bands of black and white cover the entire body. This high-contrast coloration is complemented with a triangular dorsal fin. The dorsal fin is very tall compared to the rest of their body, which is how they get their name.

These are bottom-dwelling fish, so the belly is flat. Expansive pectoral and pelvic fins jut out from the side of the body, giving the fish that signature shark-like profile.

However, the mouth is very different from a shark’s. The lips are fleshy and thick. There are no barbels, but the Chinese High Fin Banded Shark does have some tiny papillae. Inside, the fish have a single row of pharyngeal teeth.

With their visual appeal, it’s no surprise that juvenile Chinese High Fin Banded Sharks are so popular in the fish trade.

But that traditional beauty fades when the fish gets older!

Those contrasting stripes fade away, revealing a solid color. Males are usually red in color while females take on a purple hue. The body gets significantly longer as well, taking away that familiar shark profile that so many aquarists fall in love with.

Another major change is the dorsal fin. The dorsal fin doesn’t grow much with the rest of the body. Thus, it looks downright tiny on an adult fish.

Author Note: In general, adult Chinese High Fin Banded Sharks look completely different than their juvenile counterparts. While adults are considered by many to be “ugly,” we think they’re attractive in their own right!

Many aquarists aren’t prepared for the growth spurt this species goes through. While only a few inches long as juveniles, Chinese High Fin Banded Sharks grow up fast! They can reach lengths of eight inches just a few years.

By the time they reach full maturity, which happens at about five or six years of age, they are usually about 24 inches long. By that point, most have already outgrown a standard aquarium setup.

That said, they’re not done once they reach maturity.

A fully-grown Chinese High Fin Banded Shark can reach a maximum size of 4.5 feet in length! Not all fish will reach this size of course, but these fish are perfectly capable of getting there if they have a massive environment to thrive in.

Chinese High Fin Banded Sharks care is a rather interesting process for owners since you have to manage their size and growth rate.

Many inexperienced owners make the mistake of thinking that they stay small throughout their entire lives. Unfortunately, most people just aren’t equipped to deal with the needs of a massive fish like this.

If you’re thinking about raising a Chinese High Fin Banded Shark, here are some care guidelines you need to know!

Let’s start with the size of their new home. New juveniles can do fine in a tank size as small as 55 gallons. This is the perfect environment to grow up in.

However, they will quickly outgrow this environment after the first year.

Due to their rapid growth rate, most recommend keeping this fish in an aquarium that can hold no less than 300 gallons.

Author Note: For adults, your best bet would be a backyard pond that can hold several thousands of gallons of water! These fish do very well in outdoor ponds.

Another big challenge when it comes to care is temperature. These are not tropical freshwater species. Instead, they’re cold water fish!

The headwaters of the Yangtze River Basin are over 16,000 feet above sea level. Even at its lowest point, the river still has an elevation of over 3,000 feet. Thus, the waters remain cool year-round.

To help your Chinese High Fin Banded Shark truly thrive in captivity, you need to replicate these water conditions at home. Whether you’re keeping the fish in a tank or an outdoor pond, stick to these water parameters.

Setting Up Their Tank Or Pond

When you’re decorating their tank or pond, it’s important to keep things natural.

We recommend starting with a fine gravel substrate. Chinese High Fin Banded Sharks wills pend most of their time at the bottom of their habitat, so make sure that you’re choosing a high-quality substrate material.

Author Note: Feel free to sprinkle in some rock or sand mix to create a more natural look.

Now, arrange cold-water plants, rocks, and driftwood. Use these decorative items to create some hiding spots for the fish. But, don’t go overboard!

They need plenty of places to hide, but the swimming space is more important. Leave most of the space in the center of the habitat open so that the fish can navigate unencumbered.

As you can imagine, these fish produce a ton of waste when they reach their adult size. To keep ammonia and nitrate levels under control, utilize a powerful filtration system. Heavy-duty pond filters are a must if you’re keeping your fish in a habitat with thousands of gallons!

Your filter should also help create a moderate flow rate. These fish prefer a decent amount of water movement in their environment. Use pumps and the filter outlet to achieve this.

Chinese High Fin Banded Sharks can experience all of the same diseases as other freshwater fish. In poor conditions, your fish could suffer from ailments like ich, swim bladder disease, and dropsy.

Bacterial and fungal infections are pretty common, too.

In most cases, diseases occur because of poor water conditions. To avoid this, make sure to test the water parameters regularly. Perform water changes and be vigilant to keep the water as clean as possible.

However, anything lower than that and they tend to go dormant.

If temperatures drop to 40 degrees during the winter, your fish is at a much higher risk of experiencing potentially fatal disease! Invest in a heater, stay on top of water conditions, and clean the tank or pond regularly to avoid these issues.

Chinese High Fin Banded Sharks are often mistaken as herbivores. While they do enjoy eating lots of algae, they’re opportunistic omnivores that will eat pretty much anything.

At all stages of life, this species will gladly accept any food that sinks down to the bottom of the habitat. But don’t take this willingness to eat for granted! It’s important to provide a varied diet willed with high-quality proteins, vitamins, and nutrients.

To supplement the algae they eat, provide high-protein live and frozen snacks. You can give them earthworms, bloodworms, tubifex worms, brine shrimp, and crustacean.

When they’re big enough, these freshwater fish will also accept insects, mollusks, and pieces of shrimp.

We recommend a mix of both!

Despite the connotations their trade name implies, Chinese High Fin Banded Sharks are actually very peaceful. They’re not very throughout the day. Even as juveniles, most will spend their days resting at the bottom of the tank.

They do have voracious appetites, though. This means you’ll probably see the fish scavenging for food at all hours of the day.

Chinese High Fin Banded Sharks aren’t known for aggression. They get along well with other peaceful fish and can cohabitate with larger creatures without any issues!

Picking the right tank mates for a Chinese High Fin Banded Shark isn’t always easy. This is because you have to stick to other peaceful species that can tolerate cooler water temperatures.

You can keep multiple Chinese High Fin Banded Sharks in the same environment. And in fact, this is recommended!

The fish will exhibit some shoaling behavior. Not only that, but a small group is known to make individuals feel more confident in safe.

When it comes to tank mates of different species, you can keep these fish with Koi fish, most types of goldfish, and many loach species (the Dojo and Hillstream are solid options).

Chinese High Fin Banded Sharks are a favorite in the pond community because they get along well with most cool-water pond species.

Breeding Chinese High Fin Banded Sharks in captivity is nearly impossible. When they are spawned by breeders, the process usually involves hormones.

Natural breeding is difficult because the fish migrate in the wild to spawn. They will move towards fast-moving shallow waters to lay eggs. Then, they’ll go back to deeper waters.

It’s simply impossible to recreate those conditions in captivity. You might get lucky and see females lay eggs. But this is incredibly rare, and most eggs do not get fertilized.

Because of this, we highly recommend you avoid trying. The breeding process can cause a lot of unnecessary stress on your fish (even if successful). You’re better off letting them enjoy their lives in peace!

Chinese High Fin Banded Shark care is all about managing their size and temperature requirements. If you can handle that, you’re good to go!

We really like this fish and have been a fan of them for quite a while. Their unique look and friendly personality make them easy to love.

If you’re interested in learning more about this freshwater fish (or just want to say hi), send over a message! We do our best to check these regularly and will get back to you as soon as we can.