Bristle Worms In Your Saltwater Tank: Everything You Should Know

If you have bristle worms in your saltwater aquarium and aren’t sure what to do, you’re not alone.

There are a million questions floating around online about bristle worms by new and experienced reef tank owners.

Are they good or bad for your tank? What’s a bristle worm vs a fireworm? How do you get rid of them?

That’s why we put together this resource to answer all of your bristle worm questions. You’ll find everything you’re looking for and will be ready to deal with them by the time you’re finished reading.

What are bristle worms?

Bristle worms (polychaetes) are segmented worms that comprise the Polychaeta, which in Latin means “many hairs”, class of animals. They belong to the phylum Annelida, which includes the more than 22,000 species of ringed and segmented worms.

Earthworms and leeches are also included in this phylum, so just think of the bristle worm as a type of marine-dwelling earthworm.

Of the more than 10,000 species of bristle worms, also spelled bristleworms, over 98 percent live in saltwater. Fewer than 200 species live in freshwater. From microscopic in size to more than 50 feet long, bristle worms are found worldwide in habitats ranging from cold to hot.

Most aquarium species range from 3 to 8 inches in length, although some may grow as long as 2 feet.

The bristle worm’s cylindrical-shaped segmented body features a pair of fleshy leg-like appendages known as parapodia on each segment. In addition to a means of movement, the parapodia serve as respiratory organs in larger species.

Smaller species, however, breathe through their general body surfaces. The segments also include bristles known as chaetae that are formed of a material that makes up the exoskeletons of arthropods.

The bristle worm’s highly-developed head features between two and four pairs of eyes that can typically distinguish only light from dark. However, some species are totally blind, while others feature large, more well-developed eyes with lenses.

Also located on the head are a pair of antennae, appendages known as pedipalps and a pit-like nuchal organ that helps the animal detect food. The mouth, which includes a pair of jaws and a pharynx, is located underneath the head.

Although simple, the bristle worm’s circulatory system is relatively well developed for an annelid and consists of two main blood vessels, along with smaller vessels that provide blood to the digestive system and parapodia.

Because most species feature blood vessels that contract to move the blood, there’s no need for a heart. Some species, however, feature muscular pumps located throughout the system and others have no circulatory system at all but instead move oxygen within coelomic fluid throughout their bodies.

Located in the upper part of the head, a relatively large brain is central to the worm’s nervous system, which includes either a single or a double nerve cord running along the length of its body and clusters of nerve cells and smaller nerves found in each segment.

Bristle worms are divided into two orders: errant and sedentary. As their name suggests, sedentary worms move very little and either live in tubes or are burrowers. Their special types of appendages give these “lazy” worms the ability to wait to capture food until it passes by. Errant species move about using their parapodia.

As you might know by now, there’s a difference between bristle worms and fireworms. To put it simply, fireworms are a kind of bristle worm.

The reason why it’s so important to understand the difference between them is simple, one can help your aquarium and the other can hurt it.

Which are beneficial for your fish tank?

The bristle worm might look like it came right out of a Creepy Crawlers Thingmaker, but don’t let its appearance intimidate you. Aside from their prickly bristles that feel like a bee sting when you touch them, most bristle worms are harmless. Because they’re scavengers, “good” bristle worms can actually clean your tank just like snails and some species of starfish can.

That means these kinds of bristle worms can be an aquarists best friend!

Beneficial species of bristle worms are very thin and can get into small crevices more easily than can other scavengers. They’re certainly not fussy eaters and will eagerly consume anything from leftover food to algae and leaves to dead animals and even fish feces. Most bristle worms feed nocturnally as well and prefer detritus.

If you’re concerned your tank might become overrun with bristle worms, even the beneficial kind, take care not to overfeed them. Their reproductive rate is actually based on how much food they eat, so the more they consume, the more they’ll reproduce.

Beneficial species feature a wide variety of colors, from dull gray to pink to bright hues. Their bright white, evenly-spaced bristles aren’t so prominent as those of “bad” bristle worms.

Which are bad for your tank?

Bristle worms of the family Amphinomidae, known as fireworms, feature toxin-containing hollow bristles that burn when touched. There are fireworms native to both the Pacific and Caribbean regions.

Unlike bristle worm species that feed on dead animals or leftover food, fireworms are carnivores and will actually attack small live fish, often when the fish are asleep. They’ll readily consume invertebrates such as mollusks and crustaceans too.

One species, the bearded fireworm, is especially fond of corals. Unlike beneficial bristle worms that wait until dark to feed, the fireworm will feed any time of the day or night.

Fireworms are usually larger than other types of bristle worms and can grow up to a foot long. They’re also more brightly colored and can be found in hues from gray to red to yellow or green. Their red-based, white-tipped bristles feature short tufts.

Unfortunately, fireworms can reproduce at rates as high as those of beneficial bristle worms. This means if you’re not paying attention to your tank, fireworms can pop up and become a problem very quickly.

How do bristle worms get into your tank in the first place?

If your tank contains live rock, it probably already contains beneficial bristle worms. The creatures are notoriously good at hitchhiking on live rock, so you get a bonus house cleaning machine when you purchase live rock for your tank.

How can you get rid of them?

Unless they’re reproducing too profusely, you won’t want to rid beneficial bristle worms from your aquarium. If, however, you find fireworms have invaded your tank, you need to remove them as soon as possible to protect the other living things.

Option 1: Find out what eats bristle worms and introduce them into your tank

One way to remove fireworms is to introduce their natural predators into the tank. Some species you might consider adding are the arrow crab, the hawkfish, the dottyback, certain species of wrasse, the coral banded shrimp and some species of butterflyfish and puffer fish. Not only is introducing these animals into your tank one of the safest ways to eliminate fireworms, but the latter two species will add a lot to the beauty of your aquarium.

Another natural predator of the bristle worm is the arrow crab, also known as the spider crab for its exceptionally long legs. You need to be cautious about introducing this crab into your tank if you already keep coral banded shrimp, however, as it can attack these crustaceans, as well as small, slow-moving fish.

A colorful active fish, the six line wrasse, also known as the sixstripe wrasse, features six horizontal blue lines that contrast with its orange body. In addition to its taste for bristle worms, however, this fish can attack small crustaceans and other peaceful fish, especially if it’s extremely hungry or lacks an adequate environment in which it can hide. The hawkfish is another natural predator of bristle worms. This fish is typically motionless and can also, unfortunately, grab any small invertebrate that passes by.

Although introducing natural predators is generally a safe way to eliminate unwanted bristle worms from your aquarium, make sure you choose a species that won’t harm the other animals that live in the tank.

If your tank doesn’t have room for more fish, you can try a store-bought or homemade trap to capture fireworms. If you prefer to make your own simple trap, just cut the top off a plastic water or soda bottle at the neck. Then turn over the cutoff part and glue this piece on the top of the bottle, creating a funnel. 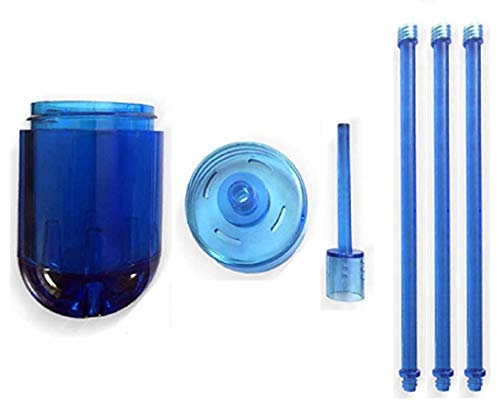 Fill the bottom of the bottle with food as bait and bury it upright in sand on the floor of the tank. The bait will attract the fireworms, who will enter the bottle and not be able to crawl out.

Ladies, here’s a practical reason to hang onto your nylon stockings that have been ruined by runs or snags. Use them to make a simple bristle worm trap! Wrap a piece of fresh food, such as a scallop or a shrimp, in the stocking and allow the trap to sink to the bottom of the tank.

The worms will be attracted to the food; and when their bristles contact the nylon, they’ll stick and won’t be able to escape.

The nylon stocking method is especially effective for catching smaller worms. Now you can discard the stocking, knowing it’s served another purpose!

You can also buy one if you don’t want to go the DIY route. Here’s a link to a very reliable and well-reviewed bristle worm trap made by JT Aquatics.

Option 3: Dig around your tank and hunt them down!

There are other methods for ridding your tank of fireworms. You can try to grasp each one individually at the center of its body with tweezers; but if your tank is inundated with worms, this process can be tricky and time-consuming. You also need to remove the entire worm because if part of the animal breaks off and remains in the live rock, it could actually regenerate.

If you suspect fireworms are hiding, you can remove pieces of rock or sediment and immediately place them in fresh, dechlorinated water. The worms will quickly evict the rock or sediment. Use this method only as a last resort, however, as other creatures living in the rock might be harmed.

Preventing fireworms from entering your tank in the first place will save you the trouble of removing them. Carefully inspect all the new rock you purchase before you put it in your tank. You could designate a special tank set aside for the purpose of holding the new rock. The rock will remain alive while you monitor it for a period of time. The process may take longer than you’d like but is worth the extra time it takes to ensure the safety of your main tank.

While there is a lot of confusion surrounding these creatures, it’s really not so bad once you understand the basics.

As always, if you have any questions about bristle worms that we didn’t cover in this guide you can always get in touch. We’re more than happy to help!

Read More
A cloudy fish tank is something that no aquarist wants to see. Not only is it unsightly, it…