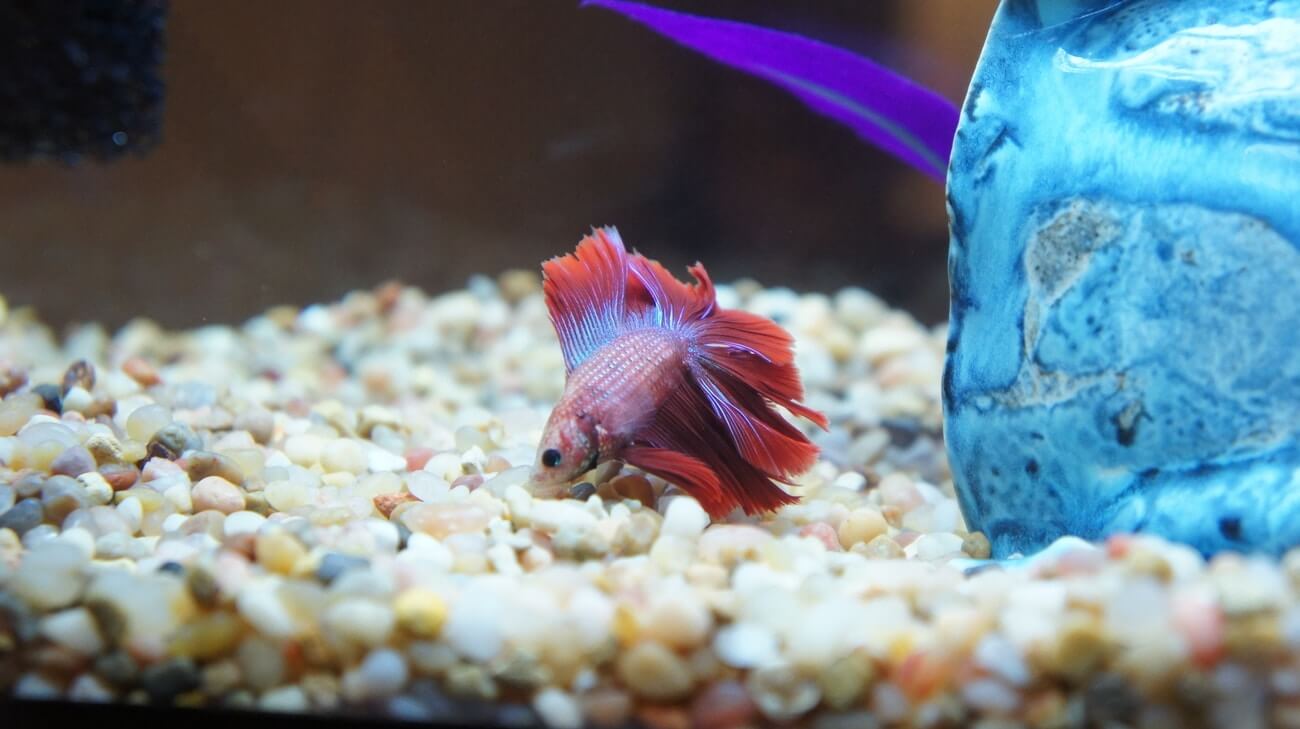 “Do Betta fish sleep” is actually one of the most common questions we get from new Betta owners.

So if you’re wondering that yourself, don’t feel silly. It’s actually quite hard to figure out (they’re sneaky when it comes to sleep).

But understanding how Betta fish sleep is something every owner should learn. That’s why we thought it was a good idea to put together this helpful guide.

By the time you’re done reading it, you’ll be a complete expert!

For most creatures in the animal kingdom, getting a few hours of sleep is a given. We can observe cats and dogs sleeping. Even lizards and reptiles appear to get some shut-eye every once in a while.

But what about Betta fish? At first glance, it looks like these feisty fish spend all hours of the day showing off their beautiful fins.

However, Betta fish sleep too!

Even though not everyone knows this, all fish need sleep. It’s an important biological function. During this time, your little Betta is reducing their metabolism and saving energy.

Of course, underwater environments are much different than the land we’re used to. In the wild, fish must stay alert if they want to stay alive.

Even though your Betta is confined to the safety of a good tank, that natural instinct to stay alert remains. This is even more true with Bettas because of their territorial nature.

As a result, Betta fish sleep a lot differently than mammals. They’re considered to be “light sleepers.” Your fish doesn’t fall into the same deep REM cycle that you do. Instead, they get some light rest while staying wary of their surroundings at all times.

Seeing a Betta fish sleep can be a bit alarming! Unlike land mammals, fish aren’t able to snuggle up and shut their eyes.

Like all fish, Bettas do not have eyelids. Thus, they stay wide-eyed the entire time they’re napping!

Color changes are pretty common with Betta fish when they’re sleeping as well. Bettas are known for their color vibrancy, which isn’t good when it comes to staying out of sight from predators.

Author Note: It’s thought that Bettas dull their color when sleeping to make them less of a target when sleeping.

But that’s not the strangest part of the Betta’s sleep cycle.

You see, these fish often get into rather precarious positions when they’re resting. Typically, you’ll find them sleeping at the bottom of the tank. The head may be resting on the substrate while their bottom is floating up a bit.

In most cases, this sleep position is to overcome challenges they face in the tank! Before they were bred in captivity, Betta fish lived in slow-moving rice paddies. The lack of significant water flow in their natural habitat makes it easy for them to rest.

In a tank with a filter, that’s not the case.

Even the softest flow could end up pushing the Betta all over the closed environment. To overcome this, they’ll sink down to the bottom of the tank to rest where things are a bit calmer.

That’s the most common position, but it’s certainly not the only option. You might see your fish laying on their side. They may even curl up a bit into an L-shaped position. While alarming, this is completely normal!

Betta fish with soft surfaces to rest on take advantage of those positions the most. They enjoy soft plant beds and vegetation to rest in. So when those places are available, don’t be surprised if your Betta fish curls up for a nap from time to time.

Now, if you don’t have those soft resting surfaces, your fish might take things to the extreme and create one!

It’s not uncommon to see Betta fish wedge themselves between rocks or on top of tank equipment. As long as the spot is stable and supportive, the fish will get creative when trying to get some sleep.

Perhaps the most alarming place these fish can sleep is on the surface of the water. Many owners have reported seeing their fish laying on top of floating plant leaves!

While you would think that this would be dangerous for the Betta or a sign that they’re sick, it’s not.

Betta fish are anabantoids. They have a unique organ, called the labyrinth, which allows them to breathe atmospheric air. It’s why these fish go to the surface and take in a gulp of fresh air periodically.

Make no mistake: these fish can’t live full-time out of the water! They still need to stay moist. That’s why those large floating aquarium plants are perfect for this species. Using them allows their bodies to remain partially submerged.

How Long Do They Sleep?

If you’ve never had the pleasure of catching your Betta fish getting some sleep, consider it a good thing.

As we mentioned earlier, Bettas are very light sleepers. They don’t need a ton of rest, but it’s still necessary to stay healthy. However, getting long periods of rest throughout the day isn’t always possible.

That’s why most will sleep at night. Betta fish actually need a stable day/night cycle. That doesn’t mean that you have to implement lighting in the aquarium to make this happen though. Ambient lighting in a well-lit room is more than enough to trigger their circadian rhythm.

It does, however, mean that the fish needs darkness at night to rest. If you have aquarium lights, never turn them on after hours. Betta fish need between 12 and 16 hours of darkness to stay healthy.

In good conditions, Bettas will take this opportunity to sleep. Chances are, it’s the same time you’re cuddled up in bed!

That’s why most Betta owners never even realize that these fish sleep.

Author Note: Now, the exact duration of the Betta sleep cycle is unknown. But it’s best to assume that they sleep in short bursts throughout the night when everything is calm and clear.

Beyond standard night sleeping, you might observe your fish taking periodic naps during the day. This shouldn’t be too much cause for concern as long as those naps are short and infrequent.

If your Betta fish is spending a lot of time sleeping during the day, it might be a sign that your fish isn’t able to rest peacefully at night.

There are many causes for this. If there are other fish in the tank, your Betta may refuse to sleep because of their territorial behavior. Too much light at night could also prevent them from dozing off.

If that’s the case, make some adjustments to the environment to ensure that your fish is able to sleep. It’s all part of providing good care for them.

How To Tell If Your Betta Fish Is Sleeping, Sick, Or Dead

It’s easy to mistake a sleeping fish for a dead one. In fact, that’s the conclusion most owners make before they even consider the fact that their fish is resting!

So, how do you tell the difference?

The easiest way to identify a sleeping Betta fish is to observe their behavior while they’re sleeping. Without making too much noise, take a close look at your fish and pay attention to their gills and mouth.

Betta fish still need to breathe while they’re sleeping. So, you should see the gills and mouth opening up every once in a while. These breathing motions will be slower than when they’re awake. But, it’ll still be observable.

Another telltale sign is the eyes. Like we said earlier, the eyes will remain open. If the eyes are looking a bit dull or cloudy, it could be a sign that the fish has passed on.

Keep An Eye On Them While They’re Awake

You should also use your Betta fish’s behavior when they’re awake as an indicator of their overall health. Oftentimes, Bettas will look like they’re sleeping when they’re near death. So, paying attention to their behavior can help you identify potential problems pretty quickly.

First things first, take a look at their appearance. Dulled coloration is common when the fish sleep. But it should perk right back up when they wake up and start swimming. If their color is dull when they’re awake, take it as a big red flag.

Also, look out for some telltale signs of disease. White or metallic spots all over the body indicate that your fish has Ich. Meanwhile, heavy swelling around the belly paired with raised scales could mean that your fish is suffering from dropsy.

Check out the fins, too. If the fins look torn or raggedy, it could be a sign of poor health. Bettas are most-known for their beautiful flowing fins. When those fins are looking worse for wear or are kept close to the body rather than fanned out, your fish could be suffering.

Beyond their appearance, take note of their behavior. Lethargic and slow movements or extended periods of time where they aren’t eating are signs that something is wrong. The same goes for hiding out for days on end.

Combine those strange behaviors with off-kilter swimming patterns and you have the markings of poor health. There’s a good chance that your fish could be near death.

Remember, these fish are light sleepers! The slightest sound can jar them awake. Let them sleep! It’s only when they don’t respond to light, sound, or food that you should be concerned.

Now you know the answer to the question “do Betta fish sleep” as well as the finer points of how they do it.

But this knowledge isn’t just for kicks. It should be used to provide the best care possible and give your Bettas a habitat that keeps them healthy and well-rested.

If you have any more questions about the sleep process that Betta fish go through feel free to ask us! We love connecting with our readers and regularly answer questions whenever we can.

Read More
A cloudy fish tank is something that no aquarist wants to see. Not only is it unsightly, it…
IInfo & Tips